Last year Fredrik Andersson and I published Determinants of Organizational Failure in the Milwaukee School Voucher Program. In that article we established the failure rate for Milwaukee voucher schools, demonstrating the particularly high liability of newness facing private (mostly nonprofit) entrepreneurial schools in Milwaukee. However, we only told part of the story. As anyone familiar with the Milwaukee Parental Choice Program (MPCP) knows, many nascent schools never actually open. This is the subject of new paper just published in the Nonprofit Policy Forum.

How many? Between 1991 and 2015 443 new schools filed an intent to participate form with the Wisconsin Department of Public Instruction (DPI), which is the fairly simple first step in entering the MPCP. Of those 443 schools, only 132 actually opened their doors, meaning just under 30% of all intended schools actually opened.

As can be seen in the chart below, the number of attempts and opening varies substantially over time. The primary reason, we argue, is regulation. When the program was capped and limited to non-religious schools between 1991 and 1998, very few new schools attempted to open. The religious expansion in 1998 led to more school attempts, as did the 2005 raising of the enrollment cap. In addition, the increase in the number of new school attempts between 2005 and 2010 coincided with lower success rates. Why? Naturally, when more schools are attempting to access finite resources (and students) fewer will be successful. 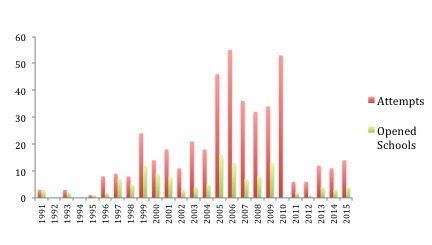 Most striking was the impact of the New Schools Approval Board in 2010 (and the subsequent slightly more inclusive pre-accreditation requirements for new schools that is in place today).   That policy, along with the charging of a non-refundable auditor fee to schools at the time they submit their intent to participate form, dramatically slowed new school attempts and successful openings.

There are a few lessons to be taken from our research. First, the barriers to entry implemented in 2010 had a dramatic impact on the level of entrepreneurship in the MPCP. Given the quality concerns that spurred the pre-accreditation process, this is not a bad thing. Second, historically it has been difficult to successfully open a new MPCP school. Sure, the first step of filing the intent to participate form with the state was easy, but most of those potential schools would never enroll a student nor receive a public dollar. Third, and less specific to the Milwaukee case, is the lesson that organizational lifecycle studies only capture part of what is happening in a population of organizations. Many potential entrepreneurs fail before their organization ever exists in any material way.

We conclude our article by stating “it is impossible to totally eliminate the possibility of a poor-performing entrepreneurial school. Policy makers (as well as other stakeholder groups) can thus never ensure high performance, yet we believe there are policy steps to be taken to help reduce the chance for failure.” Those steps include demonstrating diverse revenue streams as a condition of receiving public money, obtaining an existing school sponsor as a condition of opening, and the creation of failure plan that helps facilitate a smooth transition of students and resources in the case of failure.